Cuyahoga Valley National Park in Ohio, located between Cleveland and Akron, is a most amazing natural wonder for many reasons. Beginning with the geological history, there are a number of intriguing features. First, the glacial action carved such contours that the Cuyahoga River begins to the East of the North end of the park, from underground sources. It flows in a crooked path; “Ka-ih-ogh-ha” was Indian name for the river meaning ‘crooked.’ The river flows South to Akron, where one can also see the Cuyahoga Falls, and then it flows North, through the center of the Cuyahoga National Park and then through Cleveland. It finally empties into Lake Erie. Second, the glacier carved out deep canyons in some areas, which have resulted in areas now used for skiing. Rolling hills are interspersed with meadows.  Within the Park, there are 10 farms that grow crops used at local farm markets.

For thousands of years, Native Americans lived in the area and utilized the features of the land to be able to make their living. The natural features provided all the resources they needed to survive and flourish. A major change took place when the Ohio and Erie Canal opened the areas to immense economic growth, and products produced in the area became available for far away destinations. This boom continued and was centered around the Canal until 40 years later when the ‘Iron Horse’ and train tracks across America changed the scene. The dramatic forces of the 19th century appeared in our land with such tremendous force of power.

It is fascinating to travel to places such as Niagara and Cuyahoga, where the power and beauty of nature is so overwhelming.  And then we realize how the forces of economic growth begin to take away this beauty, as people are driven to turn beautiful places into economic powerhouses. The most dominating site in the city of Niagara Falls is the mammoth casino.

Here, in Cuyahoga Valley, I spent the day meeting and entering into educational, fun-filled discussions with people from all over the world. Three different settings. People of all ages. People out from many places across America and foreign lands.  Whether it was a group of senior citizens or a group of 50 first through fifth grade students at a summer conservation camp, there was an instant connection: the wonder of the Word of Nature.

My first stop was the area around the Boston Store, which historically was one of the two centers for commerce. Here was the main centering point and the major place for getting information, the Boston Store Visitor’s Center.

Here’s one of the observations that intrigued me immensely: the centering township of Cuyahoga is called Boston Township. No one was able to tell me where this name came from. My theory is that some people with wealth moved to the Cuyahoga Valley after the Erie Canal was built. Farmers had markets to which to send their produce, and New Englanders moved to the area.  A fascinating research question.

I then moved onto the F.A. Sieberling Nature Realm of Summit Metroparks, where I described the seed of the giant sequoia tree, as I did with the Green Team in Boston. One second grader, with an amazing wonder of joy on his face, exclaimed, “Wow! That’s unbelievable!”

The Nature Center has a research component, along with marvelous opportunities for young and old to be up close ad personal with Nature. One boy who appeared to have a handicap came up with his mother to proudly announce, “A cardinal fed out of my hand!”

Yes. People from all over the world in this marvelous space between Cleveland and Akron, sharing their thoughts and feelings about the glories of this natural wonder with very simple experiences that filled people with a sense of well being, a feeling of peace, a sense of enhanced freedom. All the things that Olmsted stated 150 years ago are the same reasons that the government should preserve these scenic places as national parks for all people today. 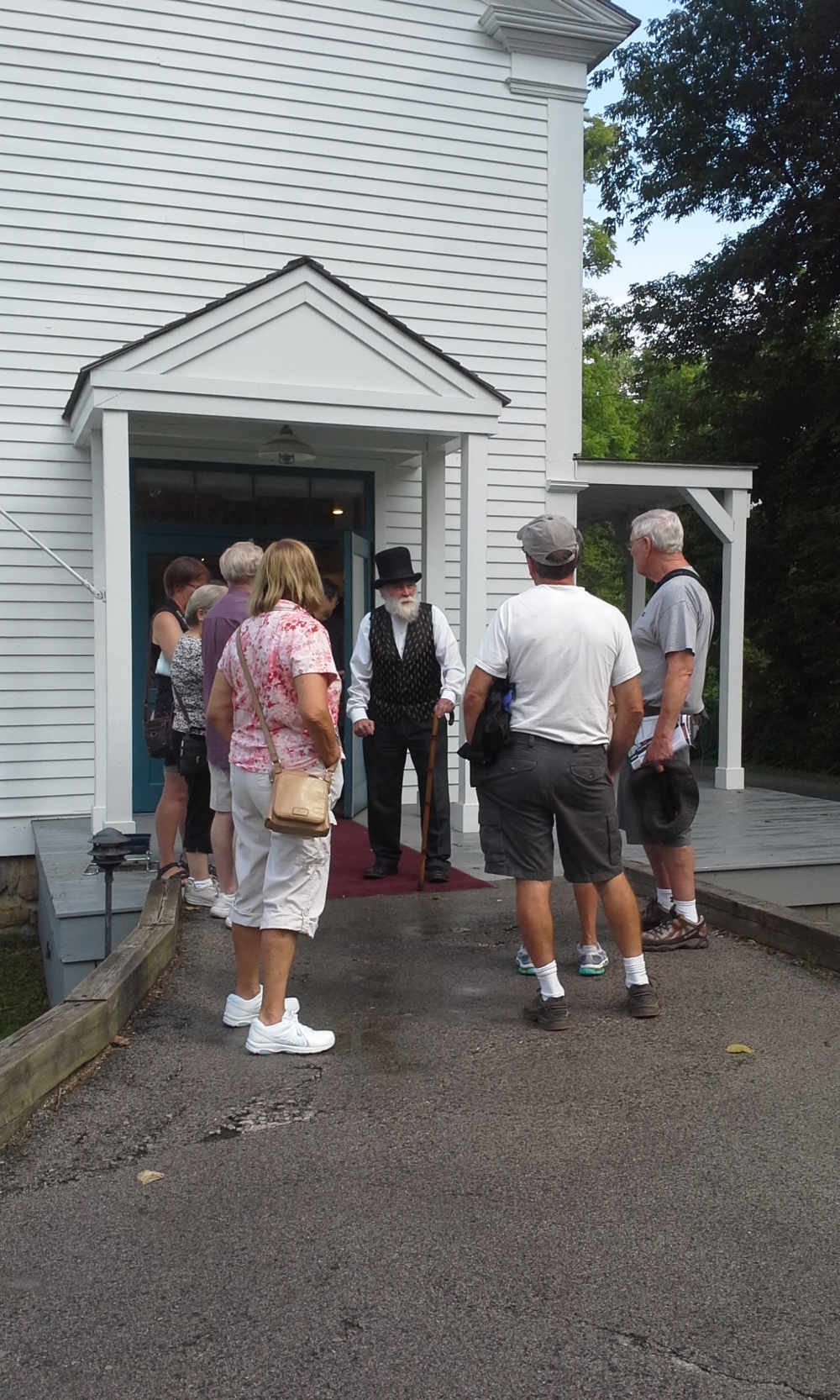 It was also very interesting to speak with retired people who had been in business who now volunteered and found great joy, relaxation, and meaning through their work. There appears to be a sense that many are reaching an age where they can reflect back and see how destructive we have been in many ways. Again, it was Olmsted who reached out to those with wealth and influence. He used a word, ‘communicativeness,’ to bring people together to preserve places for all people.

Next stop: I will be in Springfield, to have Olmsted visit the Lincoln Home, where the dialogue will focus on the relationship with these two extremely influential people in the 19th century.